Our newsletter this month is dedicated to supporting Wet’suwet’en land defenders and protesters, in solidarity with Indigenous rights, title and climate justice.

Climate justice is at the heart of our work at Be the Change.  The concept of climate justice highlights how environmental and social justices issues intersect and are often inextricably linked. One such intersection, deeply rooted in the essence of Canada’s Nationhood, relates to reconciliation and the long history of colonial institutions promoting, protecting and expanding large scale resource extraction projects on traditional Indigenous territory. It’s important to recognize that these land intensive projects are consistently upheld by violence toward Indigenous peoples and direct ignorance of Indigenous rights and title to unceded, unsurrendered land sought out by our government and fossil fuel giants for profit. Climate justice and reconciliation go hand in hand.

Recently, our Provincial and Federal governments and RCMP forces have been criticized for a string of injunctions and invasions of Wet’suwet’en people and protesters, which are alleged to have broken Wet’suwet’en, Canadian and International Law. Indigenous protesters have been blocking Coastal Gaslink from accessing their territory to construct the single largest private investment in Canadian history- a 6.6 billion dollar fracked gas pipeline that would extend 670-kilometers from Dawson Creek, B.C. to the coastal town of Kitimat, where LNG Canada’s processing plant would be located.

“Each clan within the Wet’suwet’en Nation has full jurisdiction under their law to control access to their territory. Under ‘Anuc niwh’it’en (Wet’suwet’en law) all five clans of the Wet’suwet’en have unanimously opposed all pipeline proposals and have not provided free, prior, and informed consent to Coastal Gaslink/ TransCanada to do work on Wet’suwet’en lands.” (Unist’ot’en)

Coastal Gaslink has also yet to receive approval from the province’s Environmental Assessment Office they require to begin work. Outside Wet’suwet’en law, the hereditary chiefs’ land claim is backed by a 1997 Supreme Court of Canada decision. Free, prior and informed consent is a human rights requirement under the United Nations Declaration on the Rights of Indigenous Peoples (UNDRIP), which ironically, BC recently became the first province to have enshrined it into law.

Local RCMP have been condemned for a number of actions at the blockade sites. Over the last month and a half following an injunction to remove Wet’suwet’en people from their own unceded territory, Police forces have been documented arresting Indigenous Matriarchs in ceremony, dismantling healing structures, including a ceremony for Missing and Murdered Indigenous Women, sawing through a sign reading “Reconciliation” and were exposed to have been prepared to use lethal force on Indigenous protesters and violating freedom of the press. Dozens of peaceful land defenders have been arrested locally.

The violence in Unist’ot’en sparked National protest, with railway and shipping roadways being blocked in Vancouver, Delta, Hazelton (BC) Toronto, Belleville (Ont), Montreal, Winnipeg and Edmonton, which have shut down rail transport across the country. There have also been a number of rallies and occupations of government offices in BC and other provinces- all in solidarity with Wet’suwet’en. If you are a teacher, you may see that BCTF has also released a letter of support. Protest seems to be working, as the RCMP have begun to leave the area, as Canadian officials feel the economic pressure of halted railway networks and seek talks with hereditary chiefs. The Canadian government has also postponed bringing an UNDRIP motion to the table in response to the crisis. 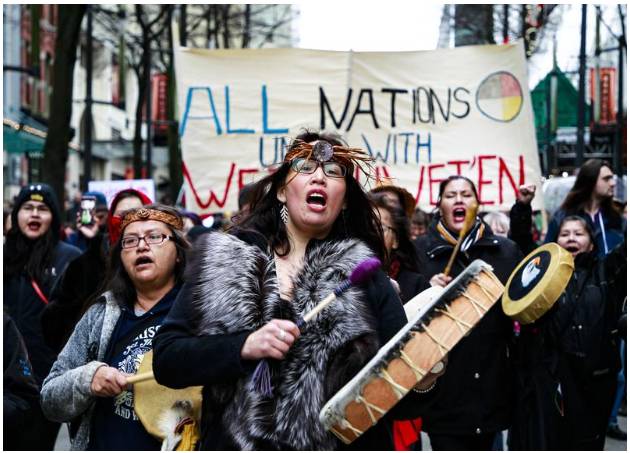 Reconciliation is not a destination, it is a road that we walk. It means listening openly, learning and owning the responsibility we have to mend the past and build Nation-to-Nation relationships moving forward- even when it feels inconvenient. It means showing up with resources to offer and acting in solidarity against injustices toward indigenous peoples. Wet’suwet’en also offers us the opportunity to see and feel climate injustice, as we watch another indigenous community fight for their inherent rights and title, while fighting to protect land and climate for all of us, as our Canadian governments attempt to push through another fossil fuel megaproject. Climate justice means changing this story.

We invite you to use this as a learning moment on a continued legacy of violent oppression of Indigenous Peoples and on the importance of respecting the varying perspectives and beliefs of First Nations who refuse to align with Canada’s colonial interests not true to their people. Let's also remember the reason Indigenous rights are being violated- to protect and uphold the production of fossil fuels at a time when we have only 10 years to rapidly cut our global emissions in half. Indigenous Peoples are leading the environmental movement. Together, we can collectively step into this space and hold it, own it, and change it.

What can you do?

There are a number of resources you may use to teach others or take action, including this toolkit produced by the Unist’ot’en resistance (visit for more info and actions).

Some actions requested by Unist’ot’en resistance are: